The Motorola MX-300S radio was one of the first synthesized programmable two-way radio's to hit the commercial market. Many of the radios survive today, they are built like tanks and can take some serious abuse. The memory modules are no longer available from Motorola so if the radio you have did not come with one or has a PROM and not an EEPROM they are difficult to put back into service.

I get regular requests for information about programming them. They are programmed using a Motorola R-1801 suitcase programmer. I have several and can program both the PROM and the EEPROM Modules. To determine what type of memory module you have requires you to open the radio and look at the components. Look at the diagrams below showing the various modules inside the radio. They will allow you to determine what type of module it contains or if it has been removed. Most of the MX-300S radio's I have obtained came from the US Government Surplus sales channels. Sometimes the memory modules were removed to prevent anyone from identiying the frequencies that were used.

In the center of the MX-300S below you will see the memory module. It is the first (top) module that has the white sticker (farthest to the left) with the UP arrow that says "TOP WARNING". The second module labeled with "TOP WARNING" is a Securenet Encryption module. Unless you have a US Government surplus radio more then likely that module is not there.


Disregard the overlay label that says "Memory Module" it is in the wrong place and I have not had time to rework the picture. 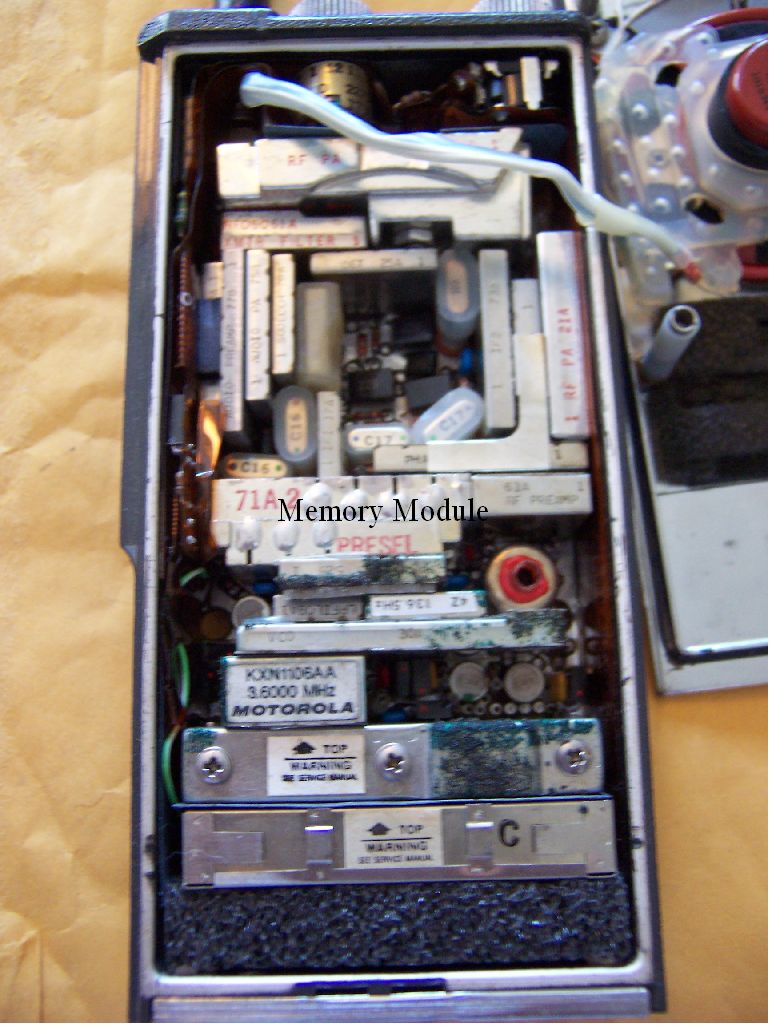 The image below shows the memory module sitting on the top of the synthesizer. It is identified with the "NLN5096C" on it's side. If it has an "NLN5096A or B" these are PROM's and once programmed then can not be reprogrammed. If the it a "C", "D" or REX-1090 then these are EEPROM and they can be reprogrammed. 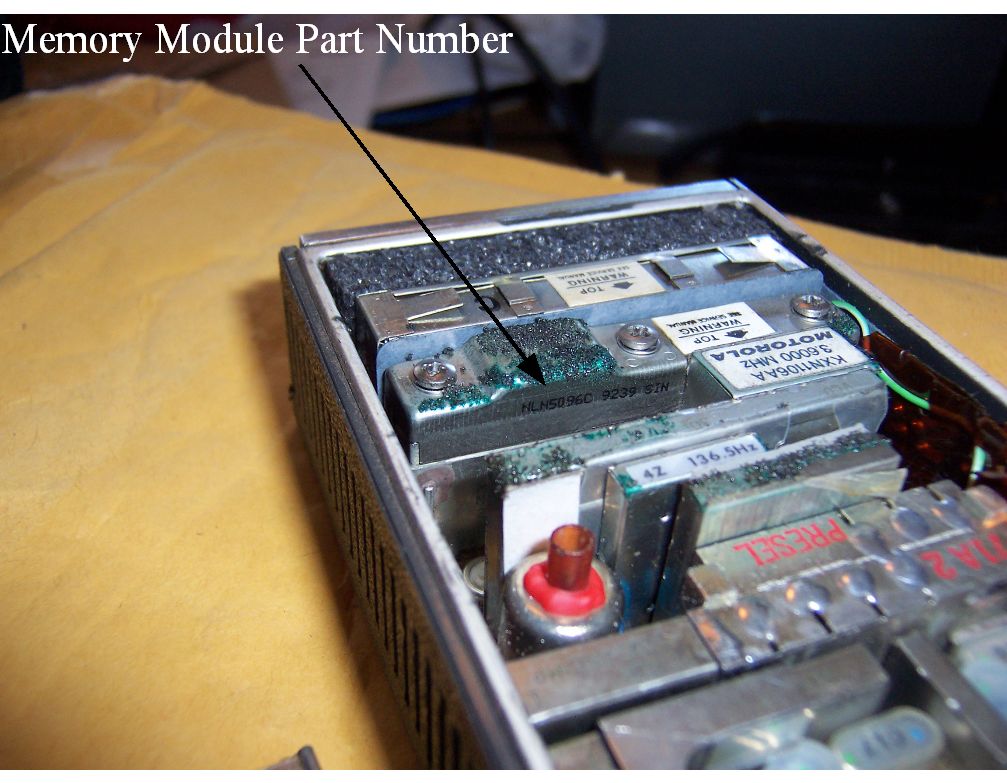 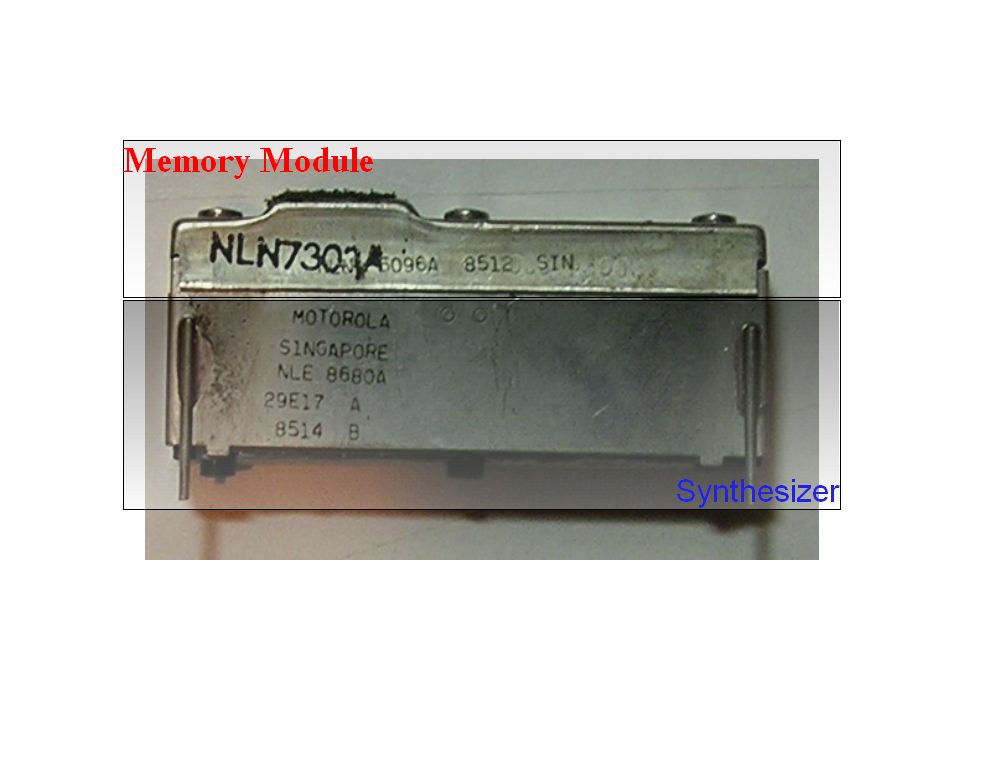 Things to consider if you are trying to put an old MX-300S back into service or reprogram it;

1) People will tell you that other zones in the PROM can be burned. Motorola recommended against it as the device was not designed to be "burned" twice. I will not attempt it as I don't want to be responsibile for destroying a PROM.

2) The MX-300S radio's were designed to operate in multiple splits in the VHF and UHF bands. The only way to tell is to physically open the radio and look at the part numbers on several of the modules or if you are lucky the previous programming plate with model number from the factory that lists the frequencies programmed.The VHF splits were 136-150 Mhz, 150-162 Mhz and 162 to 174 Mhz. You might be able to get the synthesizer to lock 1-2 Mhz outside of the design split but the performance is degraded. Within each of these splits the radio can only function in about a 4Mhz spread of frequencies. Going beyond that yields unpredicated results and again performance is degraded. If you reprogram the memory module outside of the 4 Mhz it was previously programmed & aligned for again performance will be degraded or the radio synthesizer will not lock rendering the radio useless. Same goes for the UHF radio's they are broke up into multiple splits and I do not know the exact frequencies but it is something like 406-430Mhz, 430-450Mhz, 450-470Mhz and 470-512Mhz.

3) I will program the memory modules but I am not interested in servicing the radio's or realigning them to operate outside the frequencies they were previously programmed. It is not cost effective as it can require anywhere from 30 minutes to over an hour. If you want a memory module programmed you can send me the EEPROM with a list of frequencies and the model number of the radio (model is required because of differences in the programming between models). My fee's for programming are listed on the previous page Motorola Programming
4) If the radio model or anything (modules) inside the radio end in "SP" you have a "Special Projects" radio which means Motorola changed the design or added a special module/function to the radio. No easy way to tell what that is without documentation or close inspection. Motorola long ago stopped supporting these radio's so they have no documenation available nor anyone to ask.

5) I will be happy to answer any questions via email. My email address is jjc <at> oceanviewcom.com.